Imagine going about your daily life in the busy city when a nearby volcano erupts forcing you to either attempt to flee or to take immediate shelter.

Almost 2,000 years ago in the Roman town of Pompeii that’s exactly what happened when Mount Vesuvius erupted, burying the residents who chose to stay behind beneath 20 plus feet of ash.

The volcanic eruption in 79 A.D. ironically took place only one day after the Vulcania (or God of Fire) festival. Most of the townspeople fled immediately but thousands stayed behind taking shelter, waiting for the danger to be over. Sadly most of them died.

Pompeii remained buried in ash for seventeen centuries when a royal family from Naples began the digging process hoping to gather artifacts for their collection. The tedious uncovering process is still underway today with only about 3/4 of the city discovered.

Walking the narrow cobblestone streets, it is easy to imagine the privileged modern city Pompeii once was. Most of the houses were small and simple made of brick, but many were enormous and elegant with gardens, towering columns, and detailed murals painted throughout. Some had elaborate systems, which provided running water and even heat. The city was thought to have had around 89 operating restaurants and 37 bakeries at the time of the eruption.

There were even several brothels in the bustling town. Many visitors were non-native so to avoid confusion there were (and still are) paintings depicting various sex acts so customers could simply point to what service they wanted before being led to a tiny private room with only a concrete bed and pillow.

Perhaps the most disturbing sight is the preserved bodies of residents, exactly in the position they were discovered, some appearing to have died praying.

Pompeii is a must see if traveling in the South of Italy. It has been a popular tourist site for over 250 years now and is declared a world heritage site by UNESCO.

Getting here can be done easily from Sorrento via either bus or the Circumvesuviana train which takes you right to the site. Entrance tickets are about €11. Or if you prefer you can hire one of dozens of guided tour groups. 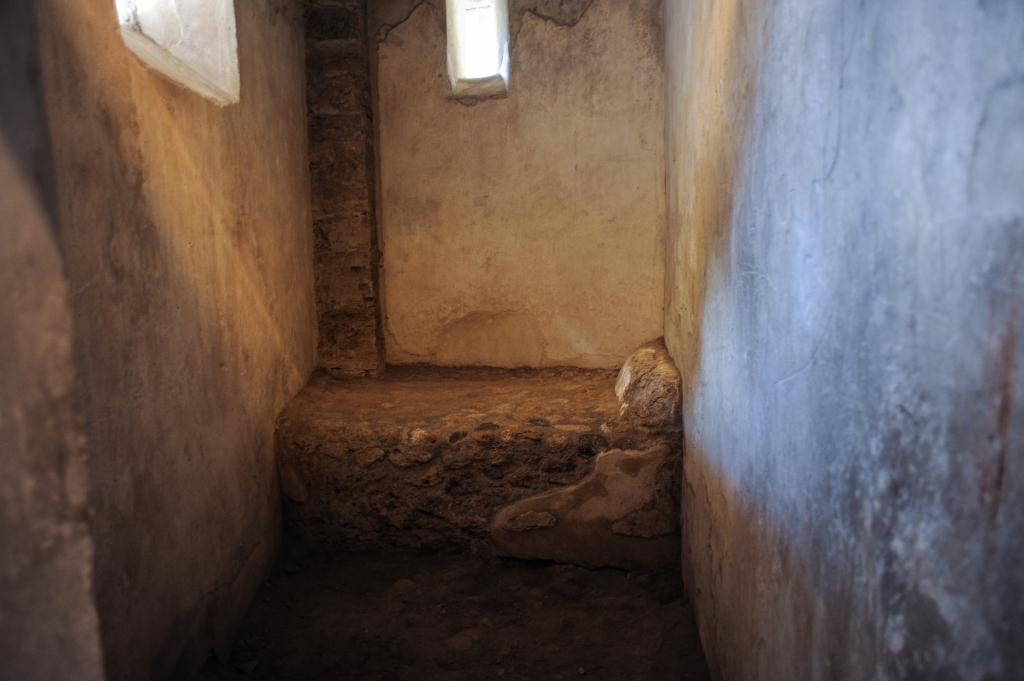 A private room in one of many brothels 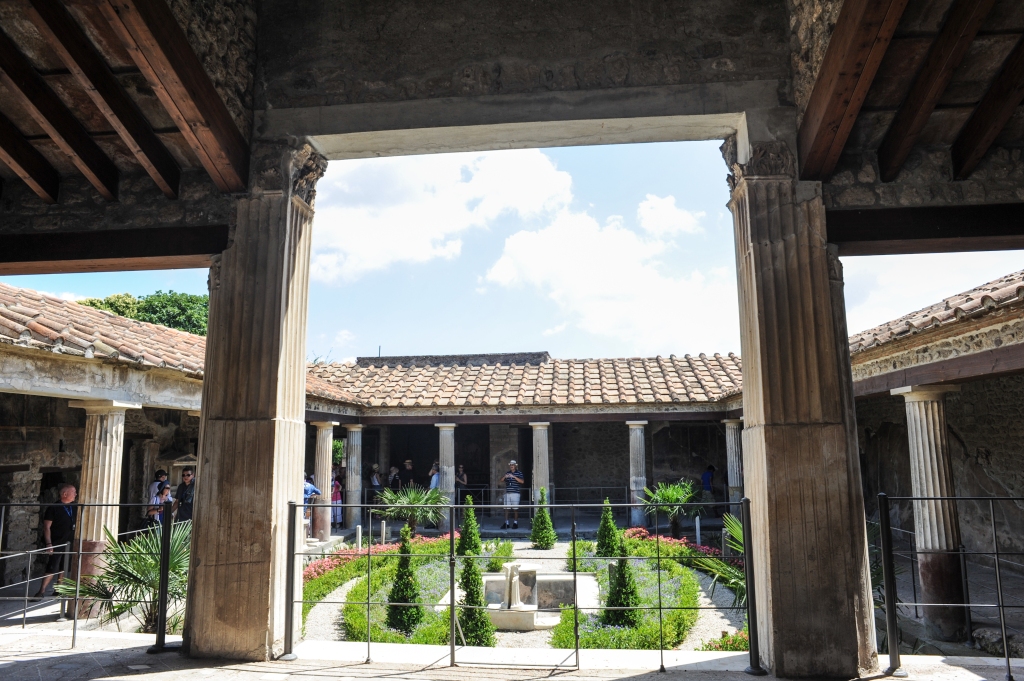 One of the rooms in a well preserved home 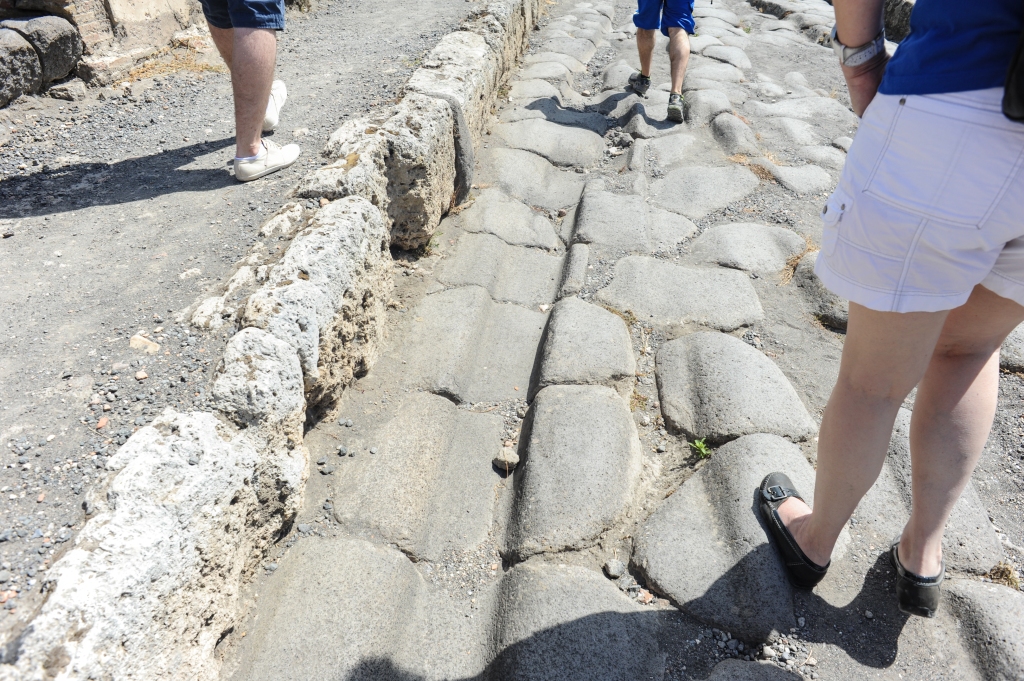 Ruts in the street from carriage traffic

A day at the spa 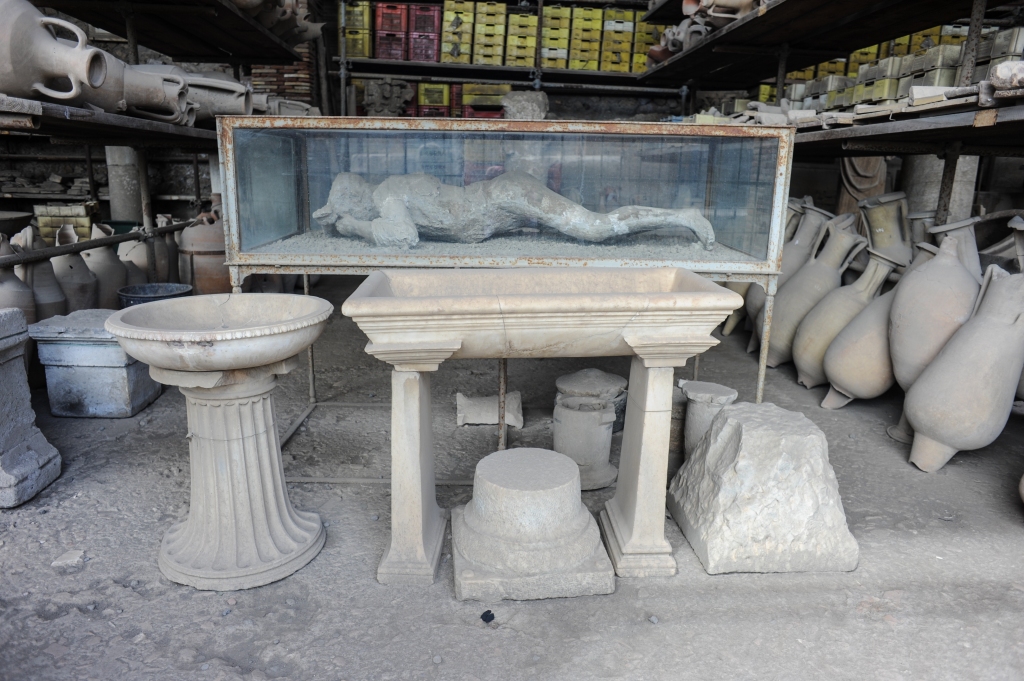 One of the preserved bodies 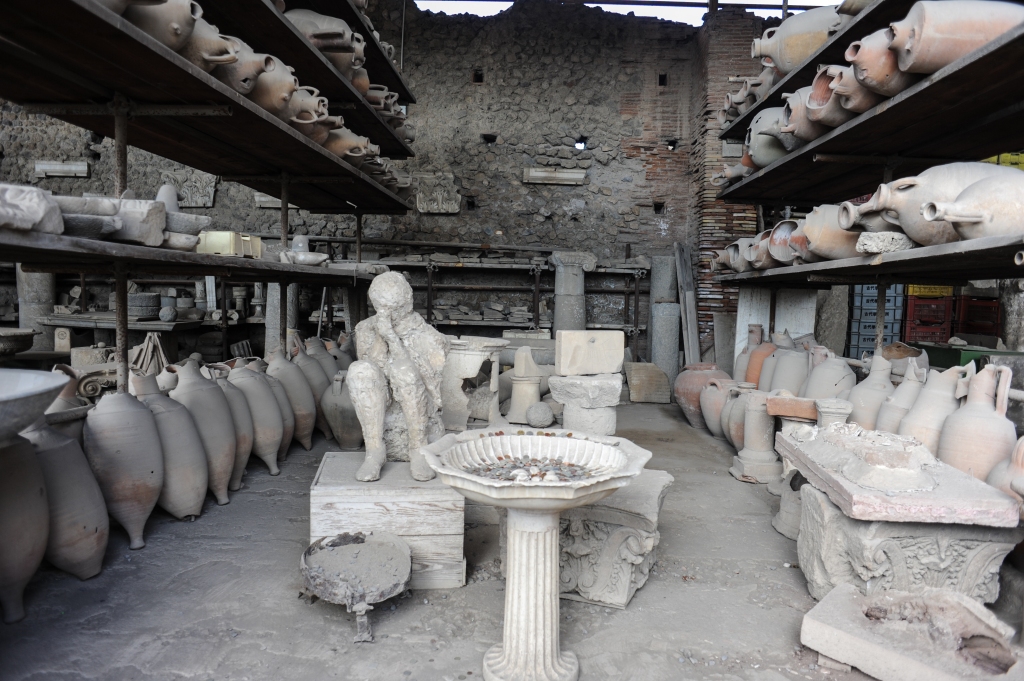 Another preserved body stored among other artifacts 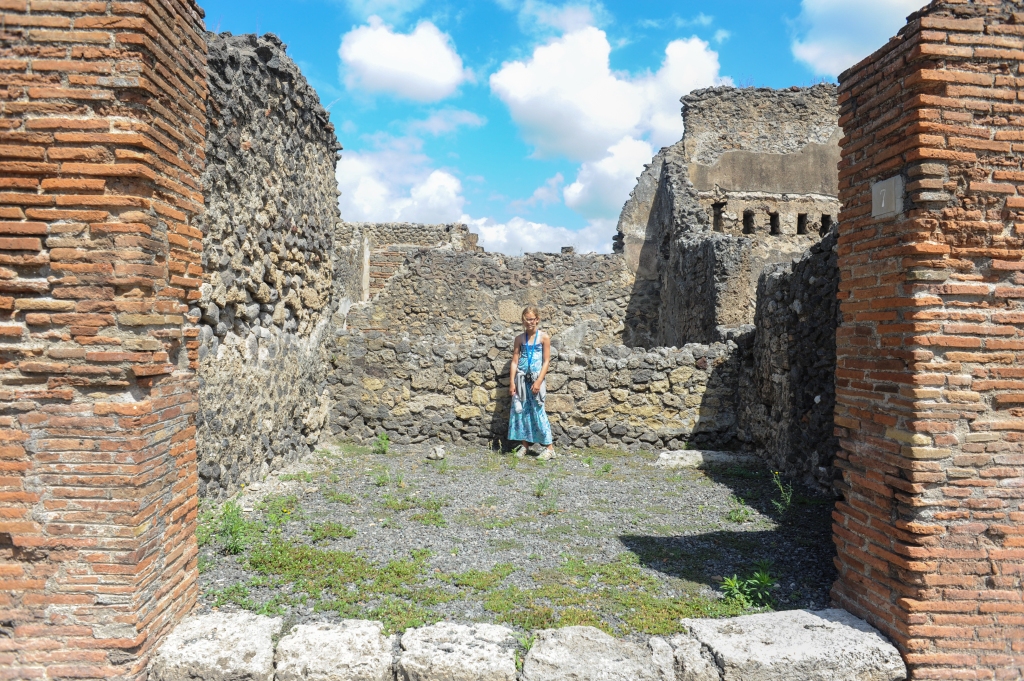 The center of town 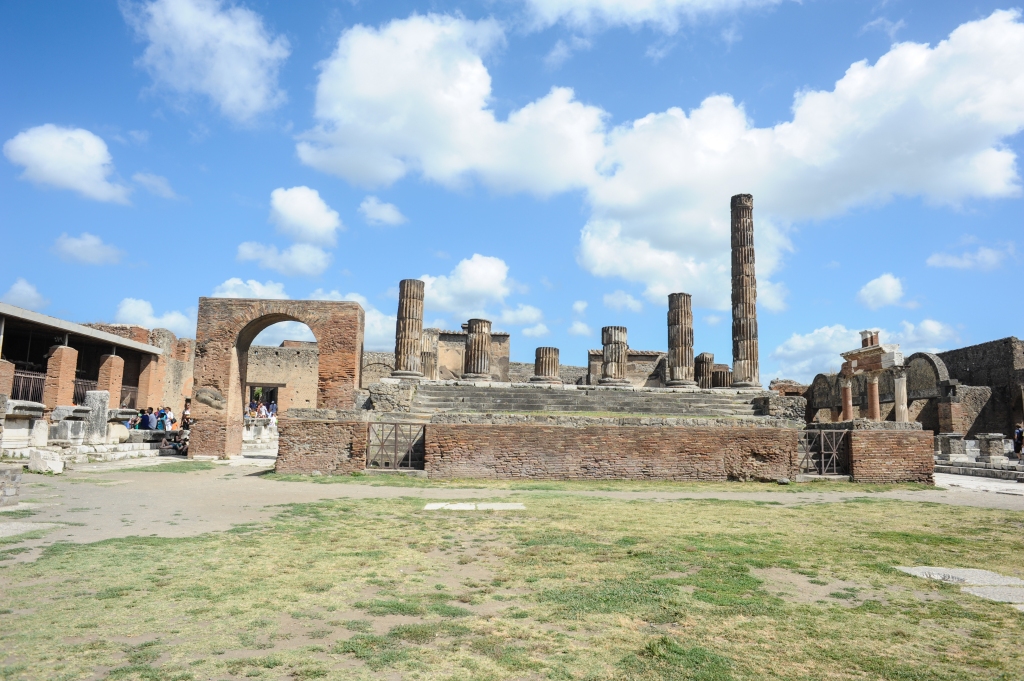 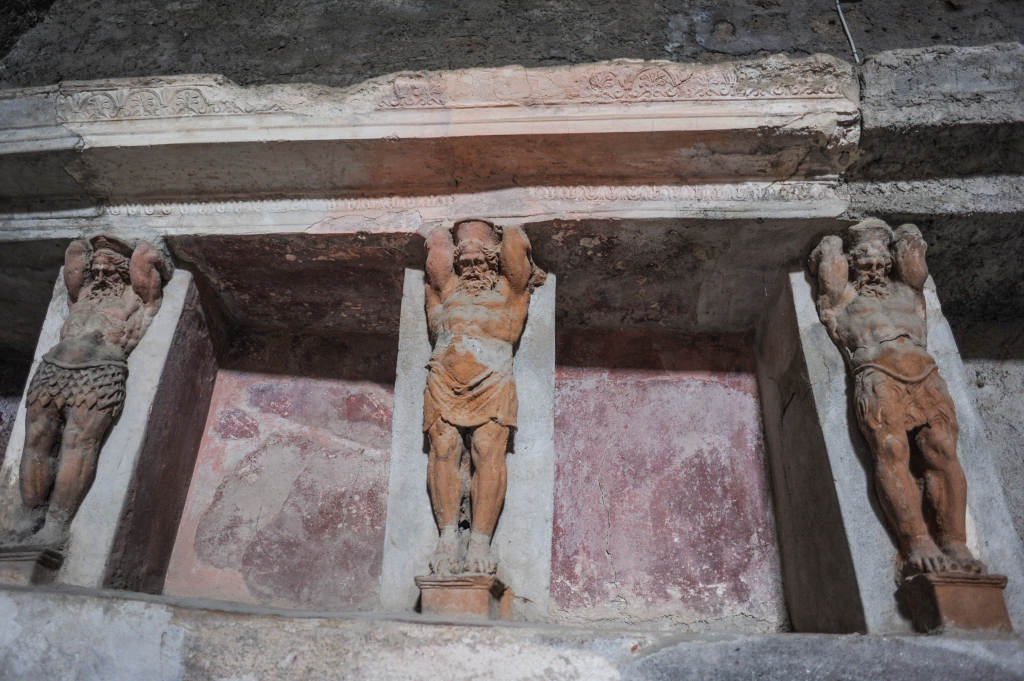 Patio and gardens at one of the homes