Inishmore, One of Ireland’s Aran Islands

After a 45- minute ferry ride through rough rolling seas, I arrive on Inishmore, the largest and most inhabited of the three Aran islands. Inishmore is a picturesque seaside village only 18 square miles in size. I spot the quaint-looking Pier House Hotel and restaurant as soon as I step off of the dock. I rent a room for the night . The room, with its 1970’s wood-paneling and various hues of brown and orange seems little outdated, but with front seat view of mountains and the sea, I can’t complain. I rent a bike next to the pier and am off to explore the island. I ride through the hilly streets, passing small farms, pubs and ancient abandoned church ruins along the way. The air is crisp and clean and the sun is shining down on me. What a perfect day, I think. Maybe I’ll stay awhile.

As I ride past a long stone-fence-lined dirt road that appears to lead to the sea, it calls to me. I briefly turn around, considering whether to go where my adventurous spirit is leading me. I’m not sure if it’s a public road or a driveway, but my curiosity gets the best of me. No wonder my family worries about me, I think, but, great risks reap great rewards and I believe, this discovery might be worth the risk. At the bottom of the bumpy dirt path, I discover a deserted sandy beach covered with craggy boulders. With water so crystal clear, I see every pebble on the bottom. I kick off my shoes, roll up my pants and dip my toes in. The frigid water takes my breath, making me decide to sit on the rocks and admire the mountains in the distance instead. A young Irish mother and toddler son arrive to play in the sand, making me briefly feel like an intruder on their little island paradise. I worry I’m invading their private time, but I don’t want to leave yet. This island is Ireland’s version of “Key West.” The smiling mom makes small talk telling me she’s visiting her mom who lives nearby. She says softly, “Most people don’t know about this place.” I feel lucky to have discovered it. After a short time, they’re on their way. I watch them as the disappear up the dirt path.

After a couple of hours of peaceful solitude, sitting and thinking about my life back in the states, I start my journey back. The rest of the island is equally remarkable. I stop to photograph a small pastel-yellow pub that appears abandoned and has been overtaken by chickens. Weeds are growing out of the windows and there are hens and roosters, which roam freely here, are perched on every possible flat spot along the porches and fence. I pass several tiny farms with horses and cows grazing beside the sea. I discover an ancient stone church that is surprisingly unlocked and empty. I venture inside, taking a seat in a pew in the back, I close my eyes and allow myself to be soothed by the beams of sunlight peering through the stained glass windows. After I have my fill, I wander up and down the hills of the island, never losing sight of the sea, stopping every few minutes to photograph abandoned houses and buildings, all overlooking the sea. I can’t imagine leaving behind a home with a view like this.

Despite the small size of the island, there are three hostels and over 20 B&B’s and hotels.
I have a mediocre ham and brie panini for lunch at the Pier House restaurant . For dinner, I decide on the Riverview restaurant. It has a classy look from the outside, but inside lacks character, with its boxy stark white rooms. The veggie fajitas are rather bland . During dinner, I notice several male diners staring at me rather intently, making me a little uncomfortable. Noticing my confused expression, the well-dressed man at the table next to me says, “Yes, I’m watching you eat.” He continues to do so until I finish, a little faster than I would have liked. Like peacocks ruffling their feathers to impress potential mates, I can’t help but wonder if the men are trying to out-do each other with their intent gazes. If they’re trying to make an impression on me, they’re doing a fine job.
Later I stop in several recommended “hot spots.” The American Bar has a DJ, colorful disco lights and 80’s disco music playing. There are no other women besides me in the pub and I count eight men. I consider slowly backing out of the door, but feel to rude to do so. A slurring gentleman approaches me trying his best to make conversation. The accents I’ve encountered thus far on the island are difficult enough to understand, without the added alcohol. He goes away, but returns every few minutes. Eventually, he gives up and kneels down and starts kissing my foot, in a rather intimate and fetish-like manner. My manners escape me and I bolt.

As recommended, I try Joe Mac’s, a small Irish pub. The door creaks as I open it, causing the few weathered male patrons to turn completely around and stare at me. I stand for a moment, then decide, after my last encounter with the foot-kisser, I’m going to follow my instincts and leave now. I feel as if I’m wearing a shirt that says “fresh meat.” On to the next suggested place, Joe Watty’s. This is my last hope for an even semi-normal evening. I’m told this is the favorite spot of the locals for music. It’s the farthest from my hotel, which is the reason it’s my last choice, plus it’s dark, chilly, and drizzling. Joe Watty’s is warm, dry smells of it’s roaring wood-burning fireplace. There’s a small band tucked away in the corner which plays, as most other bands I’ve heard, mostly American music. I see more normal looking people in here then I’ve seen all day on the island and much to my surprise I see three other females. After being invited, I join a table of college-aged people. Padraig (prounced Porrick) hands me a Guinness from the bar. “I’ll have a Balmer’s, he says looking at me.”

“I’m sorry, what,” I say wondering why he’s telling me. “I bought you a drink, now you buy me one,” he says glaring at me like I’m an idiot. At first, I laugh because I think he’s kidding, but he’s not. I do as told, but can’t stop laughing at his boldness. The band stops playing and I know its time to go.

The walk back is unnerving. It’s cold, raining hard and pitch black. While I’m walking, the stupidity of my situation occurs to me- I’m completely alone and vulnerable, in a foreign country on an isolated island with very few women. Walking along the isolated street, I pick up my pace and suddenly hear pounding footsteps running towards me. I turn, but can’t see a thing. My heart races. I should run, but instead I freeze with fear. I stand there, holding my breathe in the middle of the dark street, waiting for whatever fate awaits me.

“Hey. My mother would kill me if she knew I let you walk back alone,” Tom, a Dublin boy I met at the pub, says. Like a gentleman, Tom walks me to the front door of my hotel and says goodnight. I thank him profusely.
I lay in my bed, staring at the wood-paneled walls and reflect on my day. The crazy love I felt for Inishmore slowly disappeared with the last ferry. If I had been traveling with a group or even with one other person, I’m sure my infatuation would have lasted longer than 18 hours, but being alone here, especially at night, is too isolating and I can’t help but feel I’m a protagonist in Stephen King’s newest novel. A coffee shop or casual little cafe, where people can gather without sitting in a pub full of men would do wonders for the island. An Internet café, common throughout the rest of Ireland, would also be a welcome sight. Many travelers, like myself, don’t want to be bogged down with the responsibility of carrying a laptop, but need to occasionally contact the outside world.

At first light, I’m still wavering over whether to stay another day or head back to civilization. After talking to the guy at the front desk who says, “Weather’s taking a turn for the worst. Ferry might not run for a couple of days after the one going out this morning.” The hair on the back of my neck stands up as I think of being stranded here with only the locals. My decision is made. I hurry back up to my room, throw my belongings in my suitcase and sprint across the street to the dock to wait for the ferry.
Misty Fog blankets the island making it difficult to see the approaching ferry until its almost docked. I can hear it and smell its noxious gas fumes before my eyes fully focus on it. While I wait to board, the wind and rain picks up, making me worry we won’t make it out. I step on and the boat pushes off, heading back towards Galway, towards civilization. Inishmore disappears almost immediately as we push deeper into the fog. The ferry rolls from side to side most of the way through the mammoth whitecaps coming from every direction. What an experience you were Inishmore.

I hope to see you again someday, but next time, I’ll be bringing a guest. 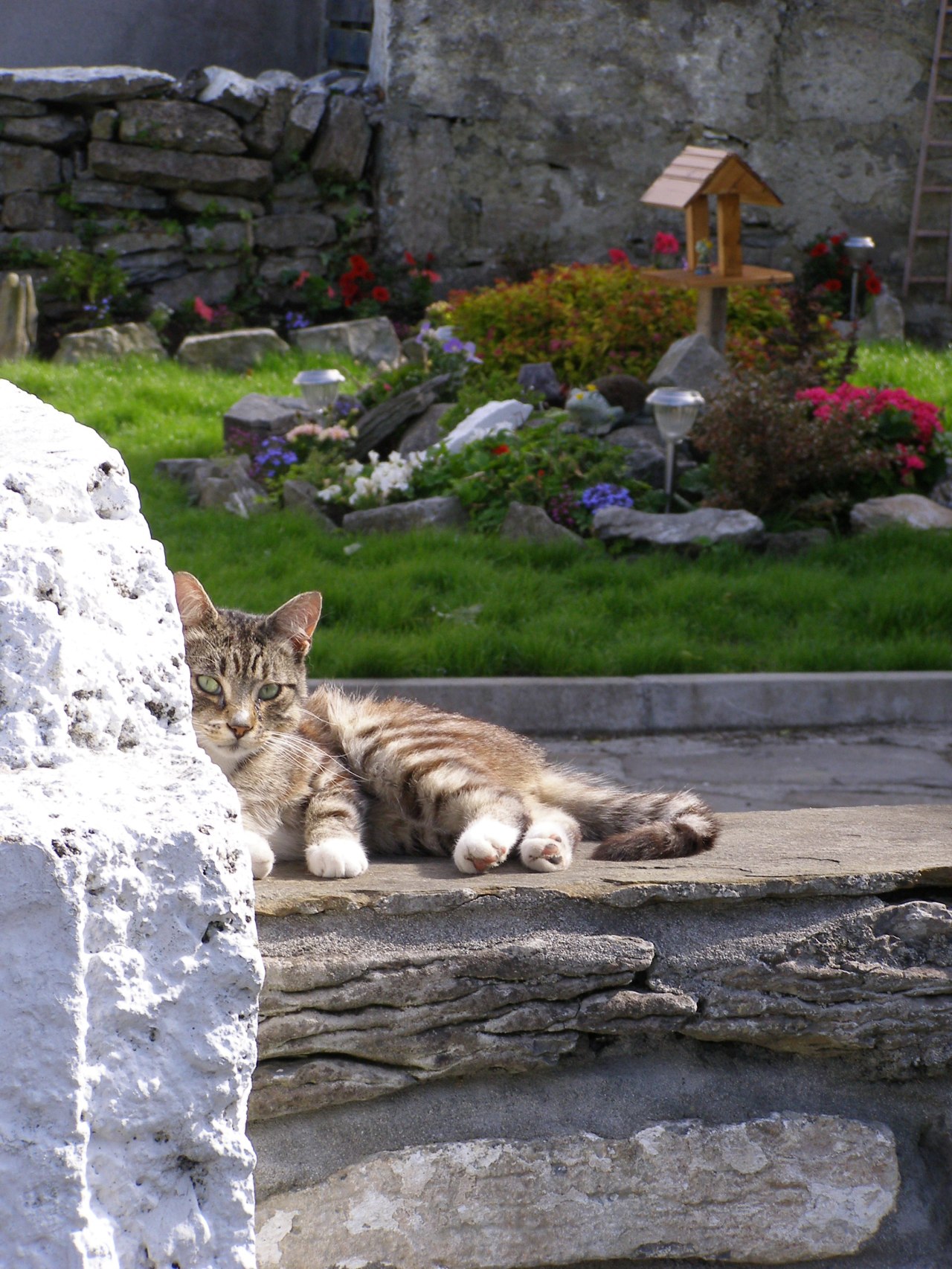 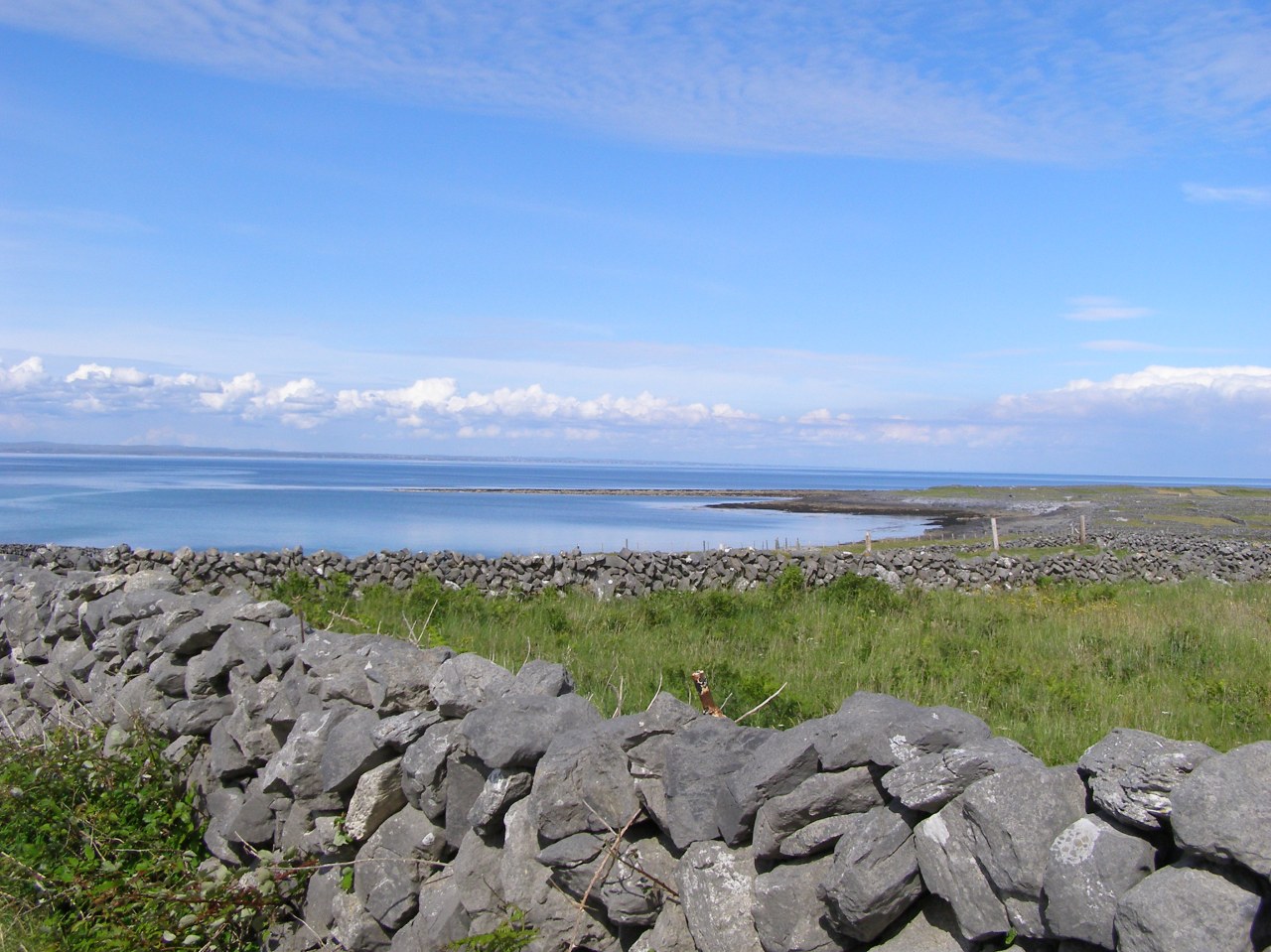 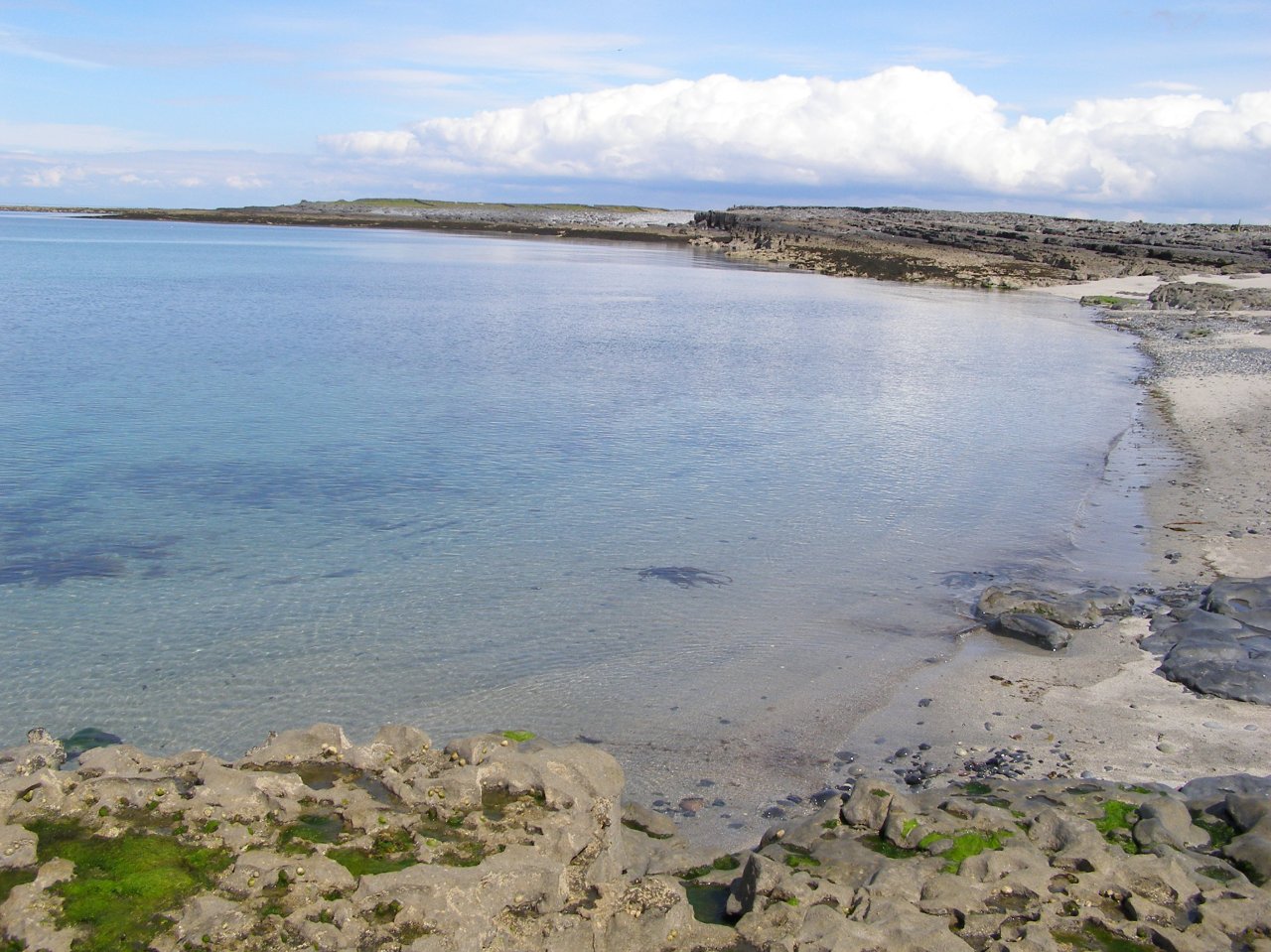 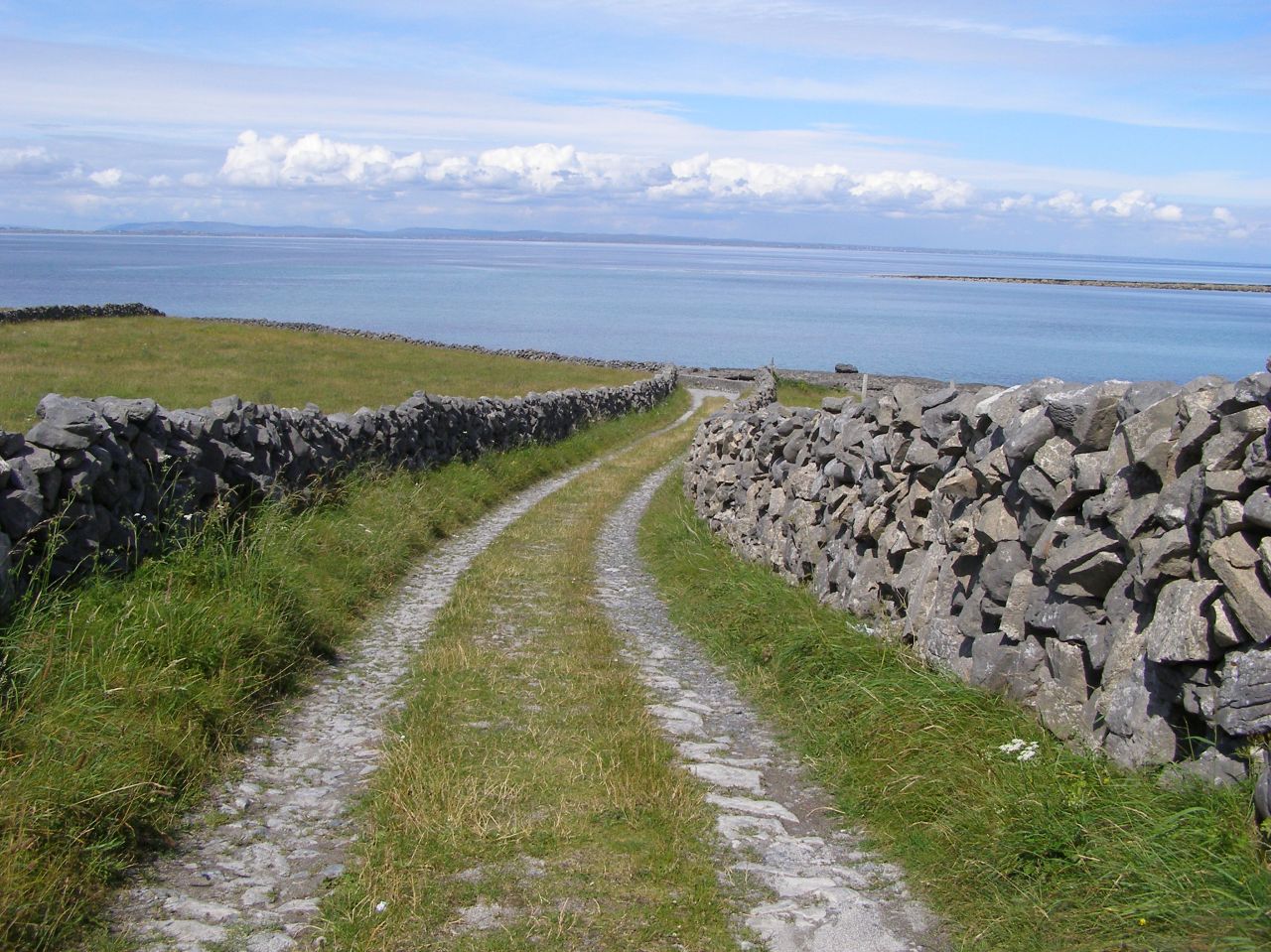 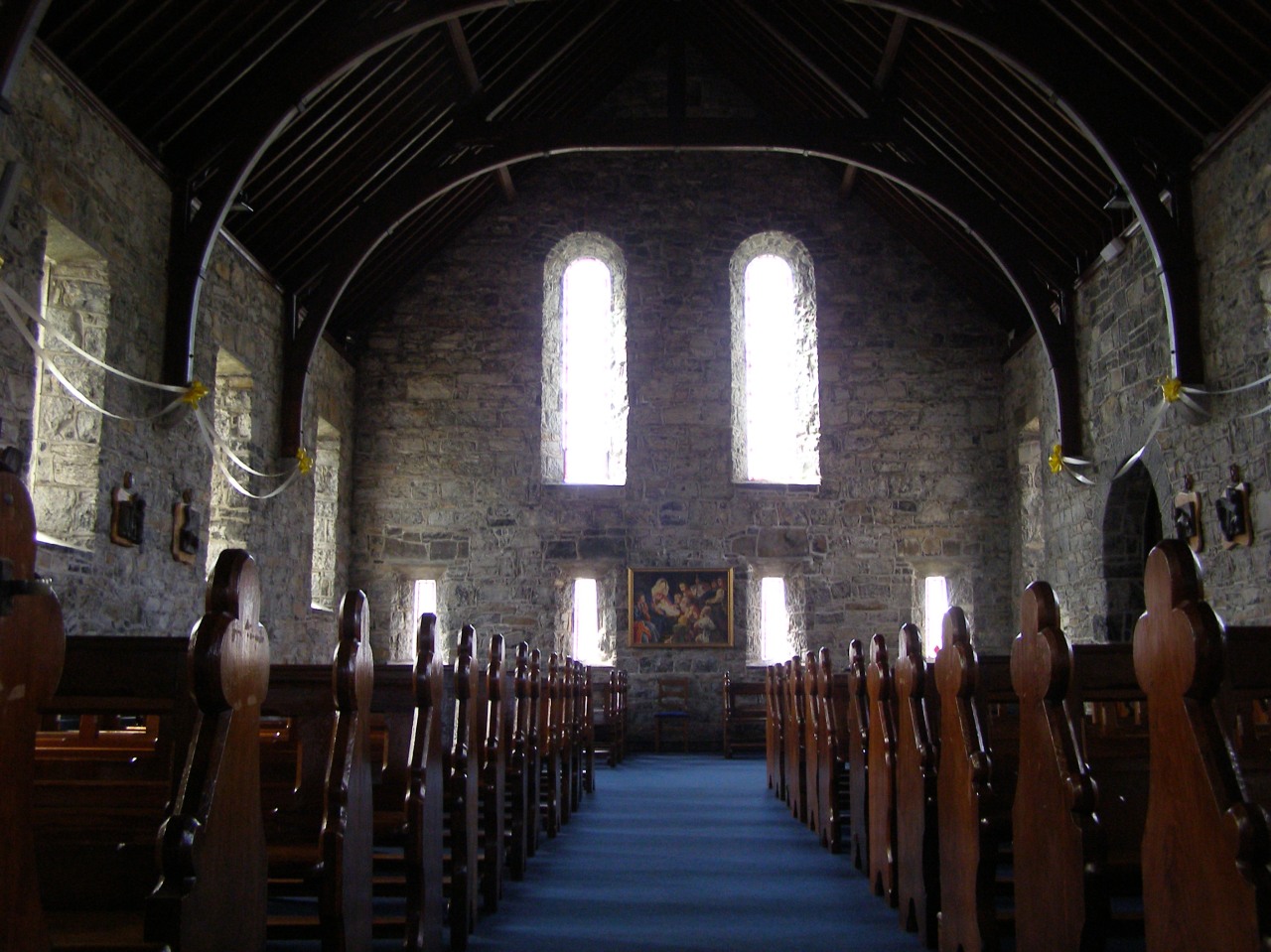